The Process of Carving a Leaf 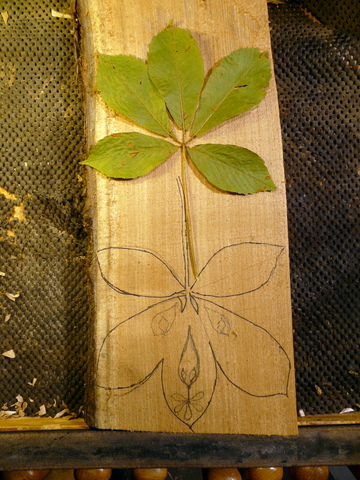 Tracing A Hickory Leaf
Most carvings start from a two-dimensional view. The hardest part, for me, is getting my mind's eye to see the third dimension from multiple angles. 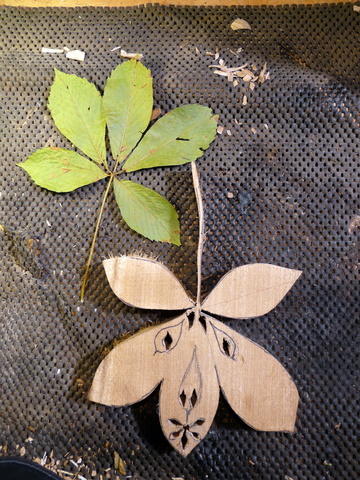 Cut Out The Title
Cut the pattern and retain markings for features with holes drilled for eyes, nose, and mouth. 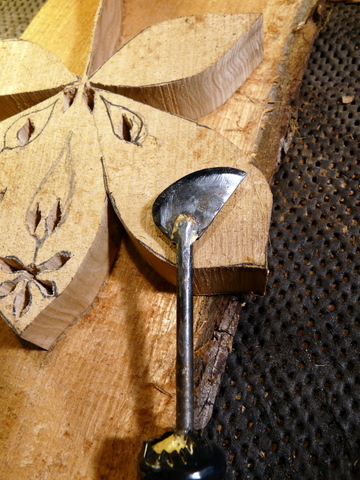 Hooked Skew (homemade)
This tool will do all of the carving for this project. I made it from a piece of a sawmill bandsaw blade. The shaft is a pole barn nail that I brazed to the cutting edge. 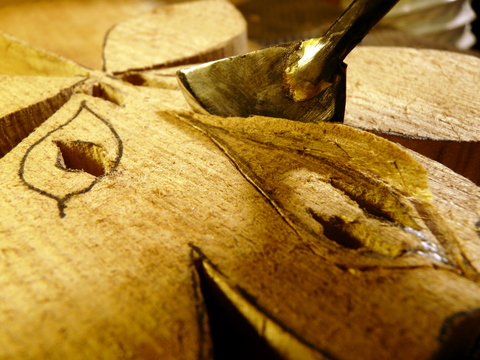 Starting The Cut
The Hooked Skew knife easily traces a line with an angled cut. Think of it as half of a V-tool. 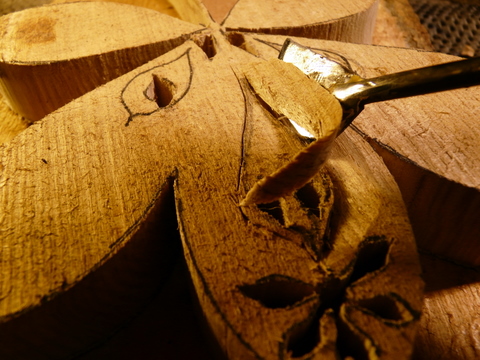 Isolating the Nose
I'm removing the wood from around the nose to give it some depth. I'll shape the nose later. 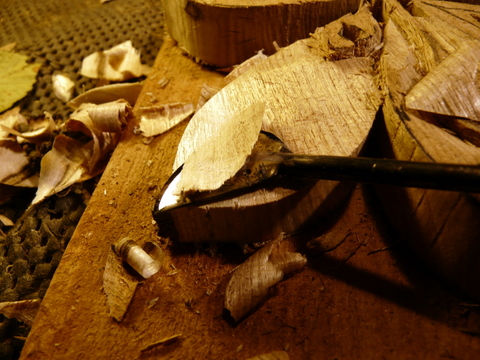 Starting on a Leaflet
Since Hickory produces a cluster of leaflets, I've started shaping one of the leaflets. 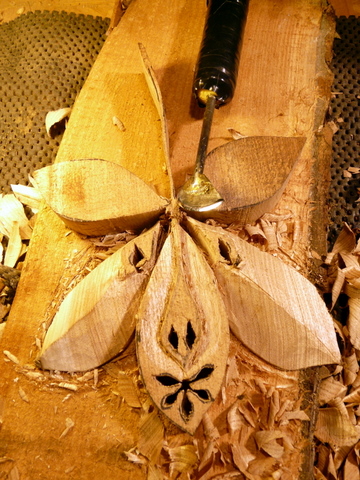 Leaflets Roughed Out
I've roughed out three of the five leaflets. 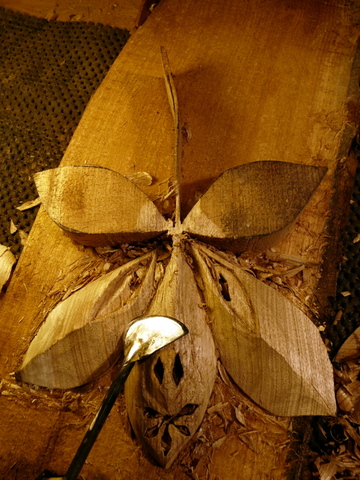 Starting on The Eyes
Shaping the eyes. I'll make these eyes oval, not round, because it's a tree, not an animal. I've already drilled out the pupils. 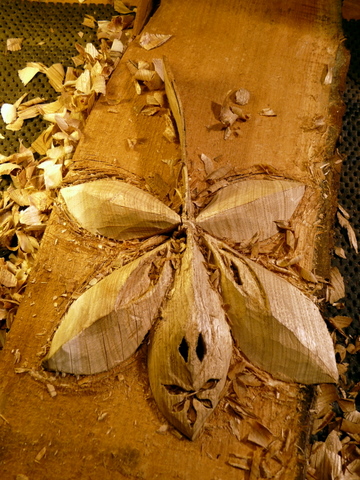 Rough Out Completed
The basic shapes for the leaflet have been roughed out. 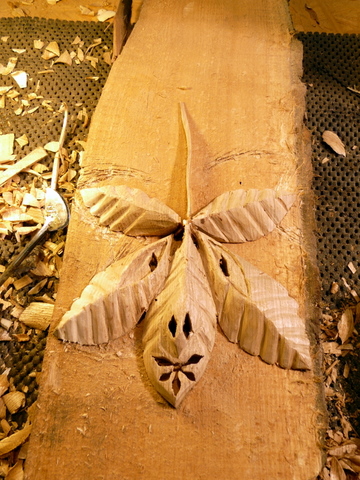 Texture Added
Finish the shaping by adding a sawtooth edge to each leaflet. 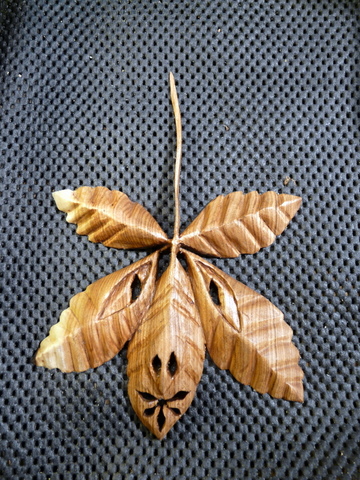 Some types of wood carving or sculpture require years of practice and loads of talent. Yet, aspiring artists need a place to start...a place to see if carving might be a suitable avocation. The image gallery below shows the simple steps I made using two primary tools: A jig saw to cut the pattern and a "hooked skew" carving knife. The knife shown is homemade from a bandsaw blade, but commercial models are readily available. It is one of the most versatile tools I have.

In 1996 I was drawn to some power carving tools in a hardware store. I needed a hobby. I crafted a few little, relief carvings while learning that skill in using the tools was not nearly as important as creating a 3-D image in my mind.

Over time, I learned to put aside the power tools and feel my work with my hands. I examined the work of others and asked a few questions. Still developing that mental image, I learned to visualize the third dimension of two dimension photographs.

I didn’t care much for step-by-step

projects, so I tried carving a face. It wasn’t good, but it wasn’t that bad; somehow it had a spark of personality. While I built skills in several kinds of wood carving, cutting away wood to reveal a face became my specialty. While I studied the step-by-step guides for creating eyes, noses, mouths, and chins, I learned to trust my feel and the mental image to know where to cut.

Retiring in 2002 and moving from Colorado to the home farm in Hickman County, Tennessee, I had a huge supply of a variety of hardwoods for carving, a much better workshop, and plenty of time. I honed my skills with hand tools where I could really feel my work.

I had plenty of good subjects—people I had known and others I had imagined from photographs. It was like giving them new life; sometimes it felt like their spirits were guiding me—especially Minnie Pearl. I’ve enjoyed doing Native Americans and working people because their faces reveal their lives.

To broaden my skills I created some long, landscape relief carvings and added the wood burning of shadows and hair on my people carvings. For fun, I created spoons, goblets, dippers, and bowls often using burls and carefully selected wood.

Fortunately, I’ve been able to sell a few good carvings over the years to defray some expenses. Some carvings are priceless to me or my wife, and I’ll never sell them.